Take 5 with "Carried Away" 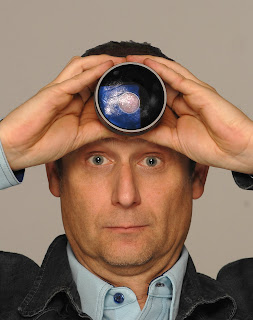 
Tom Huckabee returns to Oxford, where he has served as a panelist for three past festivals, with his feature world premiere of "Carried Away." The film screens Saturday, Feb. 6 at 2:35 p.m. and Sunday, Feb. 7 at 1:05 p.m.

TH: It's good-looking, smart and funny, like the people reading this.
OFF: Biggest lesson learned in getting the film made?

1) Staging scenes in moving cars is logistically difficult and artistically unrewarding.
2) Always get  coverage, even if you plan on using the master.
OFF: Best part in getting the film made?

TH: Getting to hang with some of the best people I've ever known. Making new friends and deepening old friendships.

OFF: Tell us about you. What is your movie making background?
TH: I started making movies when I was thirteen and won a few film festival awards while still a teenager.  After graduating from high school  I moved to Hollywood and worked as a production assistant for a year before enrolling in film school at U.T. Austin, where I co-wrote and co-directed my first feature “Taking Tiger Mountain,” starring Bill Paxton.  Back in Hollywood after college, I was a staff producer with Landmark Theaters for a few years, followed by a decade of  sundry freelance work as a producer, story analyst, script doctor, historical researcher and quality control supervisor.  In 1997 I was the associate producer and music supervisor on "Traveller," starring Bill Paxton, Julianna Margulies and Mark Wahlberg.   From 1998 – 2005 I was vice president of  Paxton’s American Entertainment, where I created and oversaw development of projects with Disney, Universal,  Imagine, Image Movers, HBO and Revolution Studios.  In 2001, I executive-produced “Frailty,” starring Paxton, Matthew McConaughey and Powers Boothe.  In 2007, I served as the artistic director of the first annual Lone Star International Film Festival in Fort Worth, Texas.
OFF:  What’s your dream distribution plan for the film?

TH: For everyone in the entire world to see it! Meanwhile, I will be touring the fest circuit and attempting to book it  at retirement centers, nursing homes, community centers, churches, universities, in other words, I plan to identify and target groups who have a vested interest in the themes of the film, such as caring for the elderly.