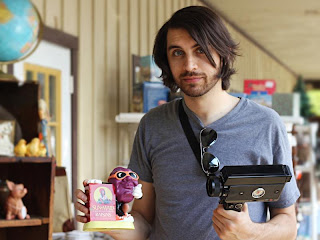 As we gear up for the 10th anniversary Oxford Film Festival, we wanted to introduce you to the filmmakers and their films you will experience on Feb. 21-24, 2013. Meet Matt Meindl, director/editor/DP of "Don't Break Down."

#1: In 140 characters or less, describe your movie and why someone should see it.
My film playfully imagines an afterlife for the garbage in our ever-present urban environments. It's a strange + personal take on a subject that tends to be heavily politicized.

#2: Biggest lesson learned in getting the film made? Best part in getting the film made?
Despite the title, EVERYTHING broke down during production (myself included) — so I guess I learned that preventative gear maintenance is a really important thing. The best part of production was having an excuse to roam around the city all day long with a camera. I remember excitedly filming a discarded diaper in the street at dawn and thinking how great the light looked hitting it.

#3: Tell us about you. What is your movie making background?
I started out making monster movies as a teenager and slowly grew into a hodgepodge-y experimental filmer. Despite today's space age video technology, I still do most of my shooting on super 8 and 16mm film, and also record my own soundtracks with cheap-o instruments.

#4: What's your dream distribution plan for the film?
There aren't a lot of distro options for experimental shorts but there are some fests + venues that I've been trying to screen work at for years, so maybe "Don't Break Down" will be the one that goes the distance. If not though, Mom has assured me that I am a handsome, well-rounded young man with a lot to offer the world.

#5: What does the future hold in store for your film and for you?
Welp, my little film is all grown up now — ready to move out and find its place in the world. I wish it luck. I hope people are nice to it. Meanwhile, I'm finishing up a music video for a band called Way Yes and gathering ideas for a new short that will probably be shot on (gasp) video.
Posted by Unknown at 10:00 AM