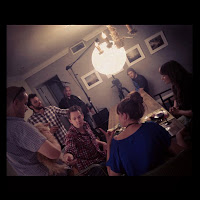 As we gear up for the 10th anniversary Oxford Film Festival, we wanted to introduce you to the filmmakers and their films you will experience on Feb. 21-24, 2013. Meet Josh Crockett and Daniel Sinclair, co-writers and producers of "Dinner With Holly."

#1: In 140 characters or less, describe your movie and why someone should see it.
Dinner with Holly is a story about having sex with the same partner for the rest of your life.

#3: Tell us about you. What is your movie making background?
We both work in TV. Dan is a writer and Josh is an editor. We'd been talking about collaborating on some film projects together and we started with this one. Twelve minutes long and one location.

#4: What's your dream distribution plan for the film?
We would be honored and thrilled if any distributor wanted to put Dinner with Holly out there for public consumption. Our plan as of now is to write the hell out of our feature script so we can get production on it going this year.

#5: What does the future hold in store for your film and for you?
We’re going to show it at the Oxford Film Festival and then see what happens!
Posted by Unknown at 10:00 AM