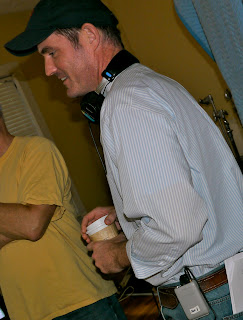 As we gear up for the Oxford Film Festival 2012 to be held at the Malco Studio Theater on Feb. 9-12, 2012 and also at the Lyric Theater on Saturday, Feb. 11 as part of the Oxford Music Festival line-up where we will show music films, videos and a panel on music + film, we thought we might introduce you to some of the people behind the movies we can't wait to show you. For the full schedule and description of the films, visit www.oxfordfilmfest.com.

Meet Take 5 filmmaker, Kevin M. Jones, creator of “Old Oak”
Q. 1: In 140 characters or less, describe your movie and why someone should see it.

A:  Set in the 1950's. Shot on RED in Canton and Jackson using all MS talent, this is a story of a Death Row inmate's final meal at his favorite diner.  But there are other people's lives that could also be destroyed that night, and the prisoner holds their future in his hands.

A:  Biggest lesson?  To always trust my instinct; it saved my bacon many times. Second biggest?  Directing is easy, directing well is sublimely challenging.  Quick story for you:  Old Oak is a period film, and authenticity was very important to me.   So we have this prop list that we're chinking away at about 2 weeks before production:  real 1950's crayons, period uniforms, a rented prisoner's suit right from the 50's chain gangs, etc.  The one stickler on the list was this authentic paddy wagon that would be used for transport between prison and diner for the film.  Admittedly, you'd think that this prop and all associated scenes would be some of the first to get scratched.  After all, how would we ever fine a period paddy wagon that was fully-restored, much less one on this side of the planet that we could rent or borrow in time for the shoot?  After several discouraging attempts, I mentioned the dilemma in passing to one of the gals at the Canton Film Office.  "Well", she said, "I don't know about that specific type of vehicle, but we could always ask ol' Greasy the locksmith.  He collects cars."  Greasy, eh?  Love him already.  Sure enough, we drive the 1/5 of a mile to his world HQ locksmith and mechanic shop, and he just happened to be putting the final touches on that fully restored and flawless paddy wagon that you see in the film.  Wow.  Just serves as a reminder that tenacity and dumb luck always seem to go well together.


Q. 3: Tell us about you. What is your movie making background?

A:  I started out as a kid with a keen interest in cameras, how they worked, various film development processes, how many times I could flash my big brothers in the eyes before I was pummeled, etc.  Then I had the opportunity to live in Paris from 1990-92 and learned under a Lebanese photographer.  We'd shoot Paris by night, then come back to the darkroom at 2 a.m. and develop.  When we finally walked out to breath some fresh air, it was 10 a.m.  Those were incredible days.  When I got back to the states, I stayed with photography but got a job as a PA on the set of commercials, movies, anything I could do.  Shortly thereafter, I began to write.  Documentaries, shorts, full-length feature treatments.  For whatever reason, I wanted to make my first real movie on my own dime.  Consider it my own little manifesto.  It took a while to save, but it was worth it.  I made the film I wanted to make.  The result is Old Oak. I hope you like it!


Q. 4: What's your dream distribution plan for the film?

A: Although Old Oak does not advocate a particular position on capital punishment, the subject is certainly one of interest to many Americans.  My hope is that the film will reach a large audience both here and abroad.   Just in case there's real interest generated from the short, I also wrote a treatment for a full-length version of the film.

Q. 5: What does the future hold in store for your film and for you?


I'm currently completing a script for a full-length feature with a great writing coach out of NYU on a totally different subject, and am also pursuing several other avenues in filmmaking.
Posted by Unknown at 10:00 AM