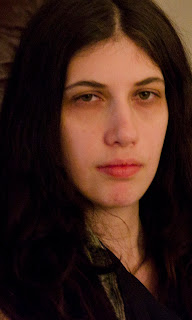 As we gear up for the Oxford Film Festival 2012 to be held at the Malco Studio Theater on Feb. 9-12, 2012 and also at the Lyric Theater on Saturday, Feb. 11 as part of the Oxford Music Festival line-up where we will show music films, videos and a panel on music + film, we thought we might introduce you to some of the people behind the movies we can't wait to show you. For the full schedule and description of the films, visit www.oxfordfilmfest.com.

Meet Take 5 filmmaker, Bianca Schreiber, creator of "Voicemail," which will play in the Experimental film block.

Q. In 140 characters or less, describe your movie and why someone should see it.
A:  My movie is about a night watchman patrolling for monsters. See it because it is about what happens after the stories are over.
Q. Biggest lesson learned in getting the film made? Best part in getting the film made?
A: The Biggest Lesson:
Getting the film made is the result of combining yourself, your camera, and the story that you need to tell.  There is a marvelous and terrible simplicity because every element is boiled down to its essence and a truth overrules objections and formulas.
The Best Part:
Seeing, showing, and sharing some small splice of the world in a new way. Creating something that will impact other people.
Q. Tell us about you. What is your movie making background?
A: I am 24 years old and I am from New York City. I graduated from Barnard College, Columbia University in 2011 with a B.A. degree in French and Francophone studies. I studied some film theory as part of my coursework for the French and Francophone major, which included a seminar course about “Women in French Cinema.” I wrote my college senior thesis about photography and the questions raised by documentary editorial war photography.
My movie was made during the summer of 2011. I was interning full time at an event planning and design company in Beverly Hills, California, "Caravents, Inc.", while staying with my grandparents who live in Los Angeles. I made the movie by using a Vivitar DVR 410 Camcorder and filming in the hallways of my grandparent’s building when the real night watchman wasn’t around.
Q. What's your dream distribution plan for the film?
A:  I would love to see it play at more festivals and then be shown as a continual looped projection in an art gallery before being displayed as a video exhibit in the permanent collection of a museum.
Q. 5: What does the future hold in store for your film and for you?
A: I will continue showing this film. I am currently editing two new black and white short experimental movies that I created this fall in New York City: “Sunday” and “Test-Drill”. “Sunday” is about the final concert performed by a man named Cello. “Test-Drill” is about a piano player who sees the end of the world.  In addition to pursuing my own projects, I am also actively looking for an opportunity to work in the film industry.
Posted by Unknown at 10:00 AM