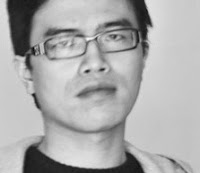 OFF: In 10 words, describe your movie and why someone should see it.
CC: A love story between a camcorder & camera. An unexpected way of revenging.
OFF: Biggest lesson learned in getting the film made? Best part in getting the film made?
CC:  Working on the central idea and extending it to a complete work.
OFF: Tell us about you. What is your movie making background?

CC:  I was a computer programmer, and them change my career to moving-images making. "Pause Replay" is my thesis animation and my first animated film.