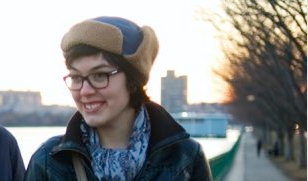 Eileen Richardson, director of "La Luz Del Pardon," talks about her film that screens Saturday, Feb. 6 at 1 p.m. in the Experimental block.

OFF: Biggest lesson learned in getting the film made? Best part in


getting the film made?

ER: The biggest lesson I learned was technical, how to go back to print with a 16mm film, while editing on a flatbed, hand processing film and cutting your own negative. A very difficult yet rewarding experience.

ER: This is my first film. I recently graduated Emerson College in Boston with a BFA in Film.

ER: My dream is coming true! I simply want people to see it- globally and that is in the process of happening.

ER: More festivals, and more films. I am currently editing a film I shot while riding my bicycle across the country this summer.