Getting to Know You with Susan "Martini" McPhail 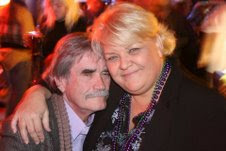 Without volunteers, a film festival would not have a chance at being successful. As we gear up for the 7th annual Oxford Film Festival, we thought we would welcome you to some of our film fest family, the volunteers that return every year and some new faces. Welcome Susan McPhail.


Her husband Johnny may be known more in the independent film world but Susan stands on her own as one of the backbones of the Oxford Film Festival (although Johnny does help a bit too). If you are an attending filmmaker and enjoy the surprises in your gift bag, then Susan is your woman to thank for the goodies.

Q: Tell us a little about who you are?

A:  I teach special education for the great state of Mississippi (NMRC), I am an autism advocate and consultant, and mom of a 24 yr. old and 22 yr old twins--one with autism (hence the martinis).  Oh and I'm married to Johnny McPhail of "Ballast" fame, among others.


Q: How many years have you volunteered with the festival?


A:  I attended the initial meeting when the festival was but a twinkle in our eyes. It was at the Law School Library and I'm so incredibly proud of what the film festival has become. I have volunteered in some capacity since the beginning.


Q: What prompted you to get involved with the festival?

A:  Being married to an actor and knowing that I'd get to meet so many cool, creative and crazy people.


Q: In what areas of the festival do you volunteer?


A: In the past I have sold tickets and acted as usher. More recently, I have been involved in donations for the after parties.  I have gotten a promotion this year and now serve as "gift bag coordinator"--still asking for donations.  Anybody got 100 of anything to put in them?


A:  There are two.  1)  When Johnny won a Hoka award.  We're still trying to figure out why, but there's no way in hell we're giving it back.  2)  When Debra Winger fussed at Johnny about not kissing me before accepting the Hoka.  I bought her a drink---for fussing at Johnny.


Q: What have been some of your favorite movies in previous festivals?


A:  Of course all in which Johnny has acted.  Also, one that stands out from last year is "Make Out With Violence."  It was extremely well done and after a year I still can't get it off my mind.  I also loved "The Last Lullaby," "Darius Goes West," and "Neshoba."  There are really none that I haven't liked.