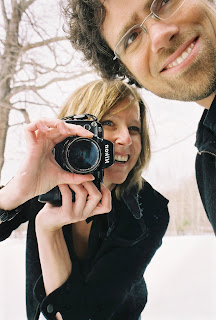 "Shooting Beauty" is a touching documentary that will screen Friday, Feb. 5 at 6:35 p.m. and Saturday, Feb. 6 at 7:40 p.m. Director George Kachadorian gives us a glimpse into the making of the film. (Bonus, special message from actress and filmmaker Cheryl Hines follows)

GK: Being documentary filmmakers, we shot lots of "experts" who were going to tell us lots of facts and provide lots of context about the characters we meet in Shooting Beauty-- but when we finally got into the edit room we threw every single frame of it out and put the story in the hands of the subjects-- a decision that has made all of the difference in the world for this film.

The best part has been watching the reaction the film has been receiving from audiences around the U.S.-- especially young people-- where the movie has received six top audience awards at film festivals to date. And traveling around presenting the film with Courtney Bent and project participant Tony Knight has been an unforgettable experience-- one I will never forget.

GK: I basically started making movies with the family videocamera at about age 10 and never stopped. My then girlfriend Courtney Bent and I started making Shooting Beauty about a decade ago-- when I had no real experience making films. Along the way, I taught myself how to shoot, produce and edit (sort of in that order), always looking forward to someday completing this documentary project my girlfriend and I were continuing to shoot. I started finding work in the freelance TV world and ended up making a dozen hours of documentaries with the ABC News Special projects Unit out of New York. Along the way, Courtney Bent (girlfriend) and I made a film about my mother, investigating her purported paranormal abilities-- and my father's refusal to believe despite over 35 years of marriage. After a fun film festival run, the movie, titled "Divining Mom", was broadcast nationally in 2005. In 2007 the PBS FrontlineWORLD folks released "A Family Erased", a story I put together about my family's search for answers at the site of the Armenian Genocide.

GK: Our humble ambitions for this film are simple: make sure that every single person spends an hour watching this movie.

GK: We're basking in the great news that HBO's Cheryl Hines has decided to endorse and officially present the film. We are in discussions with distribution companies-- one we really like out of New York-- and are busy booking screenings of the film, touring the original photography exhibit featured in the film, and attending speaking engagements. It's all very exciting at the moment. 2010 promises to be a big year for the project as we head toward our "official release".