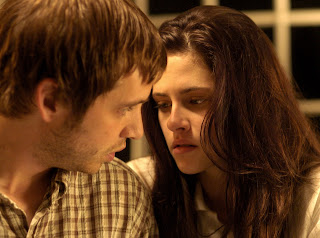 Before she was in TWILIGHT, Kristin Stewart was in another star-studded indie film called THE CAKE EATERS, directed by Mary Stuart Masterson.

Easy, the Kimbrough family patriarch, is grieving over the recent loss of his wife. His youngest son, Beagle, who was left to care for his ailing mother, falls in love with Georgia, a terminally ill, fifteen-year-old girl. His older brother, Guy, missing from the family for years while pursuing his rock star dream, returns home after missing the funeral. The Cake Eaters, the first feature from writer Jayce Bartok, is a sensitive and sweet story of losing and finding your family.

Click here to order your copy!
Posted by Michelle at 9:53 AM

I recently came across your blog and have been reading along. I thought I would leave my first comment. I don't know what to say except that I have enjoyed reading. Nice blog. I will keep visiting this blog very often.