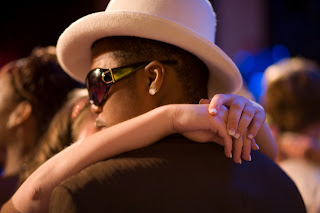 January 12, 2009
Oxford, MS —Oxford Film Festival is proud to announce the regional premiere of Prom Night in Mississippi. If you missed this film at Sundance, now is your chance to see it! The documentary feature film from director Paul Saltzman, will premiere on Friday, Feb. 6 at 5:30 p.m. in the Oxford Malco Studio.
“We are honored to be the first in the state (and the region) to show Prom Night in Mississippi. We are looking forward to hosting those who are in the film as they see it for the first time and hope we can provide an enjoyable atmosphere for the experience,” Co-Director Molly Fergusson said.

In 1997, Academy Award–winning actor Morgan Freeman offered to pay for the senior prom at Charleston High School in Mississippi under one condition: the prom had to be racially integrated. His offer was ignored. In 2008, Freeman offered again. This time the school board accepted, and history was made. Until then, blacks and whites had had separate proms even though their classrooms have been integrated for decades. The seemingly inconsequential rite of passage suddenly becomes profound as the weight of history falls on teenage shoulders. We quickly learn that change does not come easily in this sleepy Delta town. Freeman’s generosity fans the flames of racism—and racism in Charleston has a distinctly generational tinge.
“Our goal from the beginning has been to bring films to Oxford that people want to see and this is definitely one that people want to see. To be the first festival to screen this film after its Sundance premiere is a big thing for us,” Fergusson said.
“In the past we have shown several films that premiered at Sundance, but only after they have run the festival circuit. Many times the films we want have distribution by the time the festival arrives and we are unable to show them. That we are now starting to get things straight from Sundance is evidence that we are getting recognized by filmmakers as a place to be seen and a festival to participate in.
The entire 2009 Oxford Film Festival program is now available on the oxfordfilmfest.com Web site. For more information on Prom Night in Mississippi, please visit http://oxford.bside.com/2009/films/promnightinmississippi_oxford2009.
Oxford Film Festival
Founded in 2003 as a project of the Yoknapatawpha Arts Council, the Oxford Film Festival is an independent non-profit 501c3 organization committed to celebrating the art of independent cinema. The Oxford Film Festival entertains and educates its participants, providing residents and visitors with the opportunity to watch independent films as well as to meet the filmmakers and learn from industry professionals. The variety of films and panels attracts filmgoers of all ages and backgrounds.
2009 Oxford Film Festival Sponsors
The 2009 Oxford Film Festival Sponsors help sustain not only the Festival but also the year-round programs of the non-profit festival. Their support is crucial to the mission of celebrating independent film. This year's Festival Sponsors include: Presenting Sponsors – Oxford Convention and Visitors Bureau; Patron Level – Malco’s Oxford Studio Cinema, The University of Mississippi, Yoknapatawpha Arts Council; Festival Level – R & B Feder Charitable Foundation for the Beaux Arts, Media Production, The University of Mississippi, Mississippi Film Office, New Colony Homes, Donna Ruth Roberts and more.
# # #
Please let us know if your organization will need media passes for the film festival by Friday, Jan. 30. Also, if you would like to arrange for an interview with any of our filmmakers, need images or additional information please contact:
Melanie Addington
(662) 801-6007
melanie@oxfordfilmfest.com
Posted by Michelle at 8:21 PM