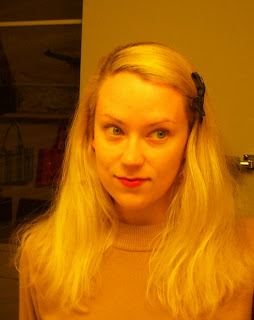 As we gear up for the Oxford Film Festival 2012 to be held at the Malco Studio Theater on Feb. 9-12, 2012 and also at the Lyric Theater on Saturday, Feb. 11 as part of the Oxford Music Festival line-up where we will show music films, videos and a panel on music + film, we thought we might introduce you to some of the people behind the movies we can't wait to show you. For the full schedule and description of the films, visit www.oxfordfilmfest.com.
Meet Take 5 filmmaker, Camilla Ann Aikin, co-director of "The Beacon."
Q. 1: In 140 characters or less, describe your movie and why someone should see it.


A: What I loved about filming The Beacon was seeing a narrative naturally emerge from all of these personal, unique stories. Making the film taught me how the most seemingly ordinary places and people are the ones with the most fascinating stories to tell; there is a documentary to be made on just about everyone and everything around us.

Q. 3: Tell us about you. What is your movie making background?


A: I've been making extremely lo-fi films with friends since high school, but this was my first experience working with film academically and on a more professional level. I've since started work on two more documentaries, and the core of my Southern Studies master's thesis is going to be a documentary on the underground music scene in the South in the 1980's.

Q. 4: What's your dream distribution plan for the film?


A: We made the film for a class at the University of Mississippi, but we definitely want as many people as possible to see it. Getting a chance to have it shown at the Oxford Film Festival is an amazing opportunity, and wherever it goes from here will be fantastic.
Q. 5: What does the future hold in store for your film and for you?


A: After completing my master's degree in Southern Studies, I plan to continue making films and writing about the South, particularly Southern music. I would love for The Beacon to go on to other festivals around the country, giving people a little look at, and more insight into, life in Oxford and Southern culture as a whole
Posted by Unknown at 10:00 AM