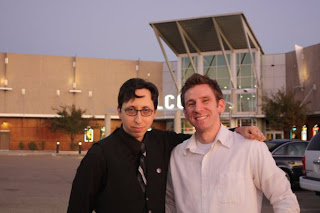 Glenn Payne (pictured on the right with Daniel Lee), a native of Tupelo, Miss and University of Mississippi master of fine arts graduate student is making his first appearanee in the Oxford Film Festival.

GP: It's a Hitchcock style thriller you will love forever!

GP: I learned quite a bit about voice manipulation during this film. Most of the film there is a character talking over the phone or from behind a door. The best part of making the film was definitely seeing the finished black and white product in the end. There are always things you wish you would have done differently but I was very pleased.

GP: I am a painter and a filmmaker. I have been teaching myself the ropes of cinema for about 4 years now. DVD commentaries are the second best tool I have found other than the actual act of going out there and creating movies.

GP: Given that this is a short film I hope it will catch a few glances at least. They are good learning tools that I like to use to try things out before I apply them to feature films.

GP: This film will be a memorable part of my journey as a professional filmmaker and as a person.
Posted by Unknown at 8:39 AM