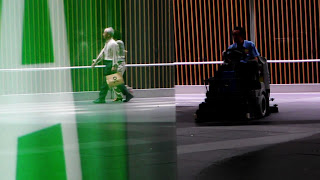 
ST: The film reminded me of this: the film that wants to be made will be made. Every part of this film was made by allowing myself to get lost in Tokyo, by emptying my mind of intent and letting the spaces speak to me. The best part for me is sitting down at my workstation and animating with the footage... to be able to take live footage and tease out details that only existed in my mind if one of the great joys of filmmaking for me.


ST: I drew my first film at the age of 8 on cut up sandwich bags and made a projector form a shoebox with a lamp in it, the lens was a magnifying glass on the end of a toilet paper tube... the film melted in seconds. What I do now is not all that different, very personal and handcrafted. I've made twelve short films and two features, and they've played all over the world, even Antarctica.


ST: I'd like Apple to open iTunes sales up to truly independent short film, not just Dinsey/Pixar and stuff pre-approved by big distributors, otherwise experimental work will never end up there. Otherwise, after its festival run, I'll sell GIRI CHIT for download my my own site, www.quarknova.com.


OFF: What’s the future hold in store for your film and for you?


ST: Right now I'm working on my third feature about my grandfather who was killed in WWII, and I have several new shorts that I'm developing as well that will feature Star Wars toys, sock puppets, and Strom Thurmond... not necessarily in the same movie.
Posted by Unknown at 3:54 PM