Take 5 with "The Ballad of Friday and June" 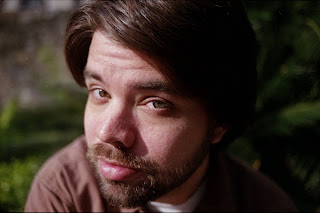 Writer/Director Tate English's short film,  "The Ballad of Friday and June," will play Friday, Feb. 5 at 10 a.m. and Sunday, Feb. 7 at 11 a.m. with "Bicycle Lane." Coincidentally both Tate English and Jeffrey Ruggles of "Bicycle Lane" have beards, but we swear we didn't put them together just for that reason.

TE: Patience, patience, patience. I had this movie in my head for over a year before we started shooting. It took a lot of effort and willpower to keep myself motivated to make it with the pressures of bills and day jobs. We finally shot it, but more money problems kept us from finishing post for another year - it was a labor of love on all our parts, which of course meant it didn't pay, so everyone had to keep stopping in order to work on paid gigs. There was a point at which we could have just taken the shoddy rough cut and called it done, but I wanted it to be good, so I made peace with the fact that it would take a while. In the end, that allowed me to step back and really look critically at it and make decisions based on what was important for the story, not just my own biases. I became a better judge by walking away for a while. So that was the biggest lesson and the best part - learning that things will take as long as they need to, and that's okay.

TE: I went to film school at the University of Texas at Austin, and I did a lot of work for the student television station there. Most of the people who worked on the film, and it's a small group, are friends of mine from those days. I've been here in Austin since I graduated in 2003, plugging along and making short films when time and money allow, and always with the same group of people. My friends are the reason I can't imagine leaving this town, even if there's more money somewhere else.

TE: The fact that this little movie is playing so many festivals and that people seem to like it so much is honestly more than I ever dreamed. I wrote it when I was feeling kind of depressed and creatively inadequate, and here it is doing better than any short I've ever made! I couldn't be happier with the "distribution" I'm getting through festivals - meeting people in different parts of the country, hearing about how it affected them or made them happy. I'm trying to put together a DVD that I can sell people cheaply, hopefully I can use the magic of the Internet to make that happen.

TE: I've done a little networking at various fests, so I'm awaiting acceptance/rejection from several festivals around the country. I'm working with my friend, editor, and frequent collaborator Don Swaynos on a feature-length script based on Friday and June. As for me specifically, I guess I'll just keep making movies like I always have. It's nice to know that I can get one right every now and again.