Take 5 with "Among the Giants" 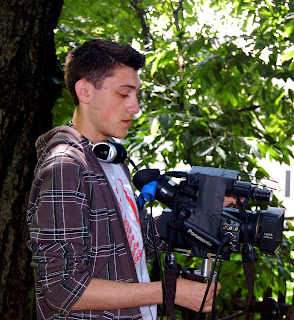 Cory Tomascoff, director of "Among the Giants,"  shared with us a bit more about adaptive design and his short documentary. The film screens on Friday, Feb. 5 at 6 p.m. and Saturday, Feb. 6 at 7 p.m.

OFF: In 10 words, describe your movie and why someone should see it.
CT: How an innovative nonprofit is rethinking design. Compassionate and inspiring. OFF: Biggest lesson learned in getting the film made? Best part in getting the film made?CT: The biggest lesson I learned was how to trust my instincts as a filmmaker. During February, I went to New York City and filmed at Adaptive Design for a week. It was a very difficult process because I had trouble sticking to my storyboards and shot lists while running around New York City which is always very big and bustling. By the end of the week, I felt like I could better trust my quick thinking and split-second decisions. The best part was the premiere in New York City and watching the reactions from the individuals in the film. OFF: Tell us about you. What is your movie making background? CT: I've been making films for nearly seven years. In the beginning, I used my digital camera and taught myself how to use iMovie. Then I began making spoofs with friends, and then I realized that I really loved making films and I should be serious about it. OFF: What’s your dream distribution plan for the film?
CT:  The goal is that the film is shown to as many people around the country [and even the world] as possible. The hope is that with more exposure, there will be more interest in starting up other workshops for all the people who need help who do not live in New York City. OFF: What’s the future hold in store for your film and for you?CT: The film will also be screening at the Reelabilities: NY Disabilities Film Festival and I and waiting to hear from a number of other festivals as well. I will be starting up my second semester of my freshman year at Ithaca College later in January, as well as working on a few film projects of my own.
Posted by Unknown at 7:36 PM