Intruder in the Dust: 60th Anniversary 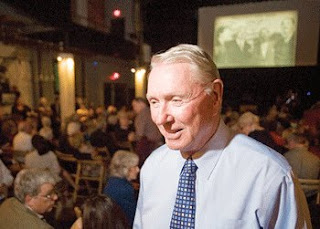 Photo by Bruce Newman for the Oxford Eagle

Thanks to all who attended and/or supported our 60th anniversary screening of Intruder in the Dust. We are anxiously awaiting the photos from our intrepid photographers, and hope to post them by/before the end of the week.

Highlights included: hearing stories from Lee Caplin (agent of the Faulkner literary estate), watching Claude Jarman, Jr. meet and greet those who had met him 60 years ago, laughing with the crowd about x-ray glasses during Joe York's documentary, When We Were Extras, and again during the Q&A, and eating mini salmon cakes and other delights from City Grocery.

This was our big fall fundraiser, and attendance was estimated to be between 350 and 400 people. We won't know the final numbers until we clear our expenses, but in the most general of terms, it was a successful evening on all levels. We still need your help, however -- we have a long way to go to make our budget -- but this is a great start.
Posted by Michelle at 8:37 AM